The above test was done with a Nikon Z7 using the Sigma 40mm f/1.4 art lens. At 1/15th second the vibration reduction is very effective. 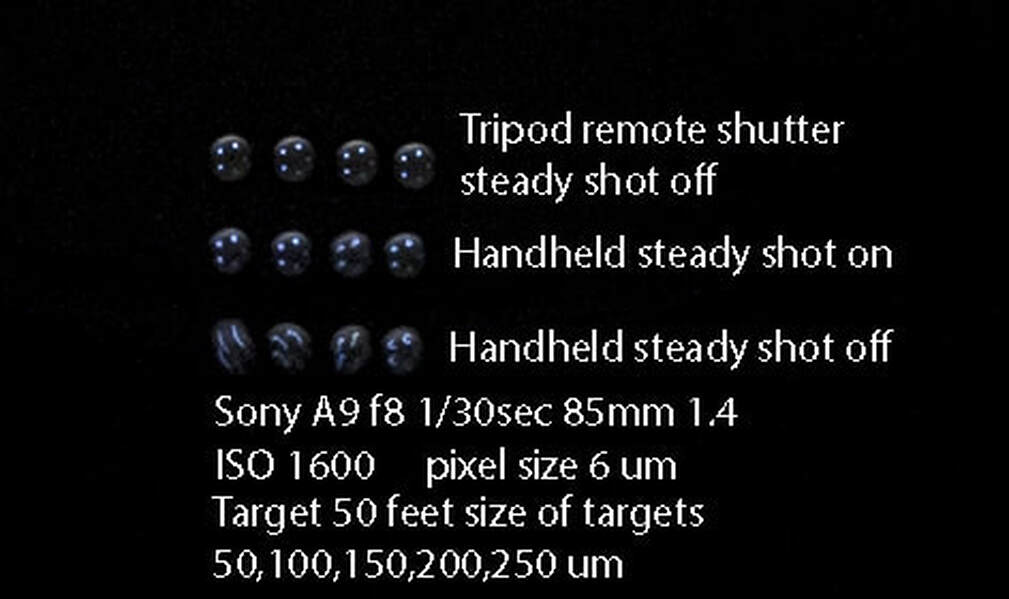 Download File
Using a Sony A9 I took 4 shots: 1) Tripod and remote release, 2) Handheld with steady shot on, 3) Handheld with steady shot off.  The lens was the85mm GM set to f8. The shutter was 1/30 second. The ISO was 1600. Manual focus was used. The target was an artificial star located 50 feet away. There are 5 stars or pinholes with diameters of 50, 100, 150, 200 and 250 microns. The 150 micron star is about the same size as a pixel projected on the sensor. Handheld movement of about 12 pixels was observed. The steady shot reduced this by about a factor of 4 to 3 pixels or two f-stops. With the tripod and remote release there is no motion but some variation due to noise. The lens does not have optical stabilization, so the stabilization depends on the stabilization provided by the servo moving the sensor.

The conclusion is that the standard suggestion of 1/f shutter speed, or 1/85th second for an 85mm lens will still leave about 3 pixels movement. 1/2f  or 1/170 is better with about 1.5 pixels movement. 1/4f should eliminate most movement. Obviously this is a random movement and some pictures will be better than others. Shorter or longer focus length lenses will adjust the shutter and movement proportionally. With a 30mm lens 1/100th second or near 1/3f,  should be quite good. With a higher resolution sensor a somewhat faster shutter is needed. The A9 has 6um pixel spacing, the A7R3 4.5um and the Hasselblad X1D-50C has 5.3um spacing. The Sony A6500, APSC camera, has 4um spacing.

The conclusion is that in low light a tripod  with cable release is surely indicated, especially if the lens is stopped down for best sharpness.