Norm's Photo Blog
Search
Using the Stackshot Motorized Rail for Focus Stacking
The Stackshot motorized rail is a product of the Cognisys company. The photo below shows the stackshot with a Panasonic S1R camera and the 70mm Sigma macro lens. The computerized controller for the stackshot advances the camera toward the object and trips the shutter. Cognisys has shutter cables for various cameras, but not for the S1R. I made a homemade cable that is documented here. The controller can be battery powered, allowing use in the field.
​ 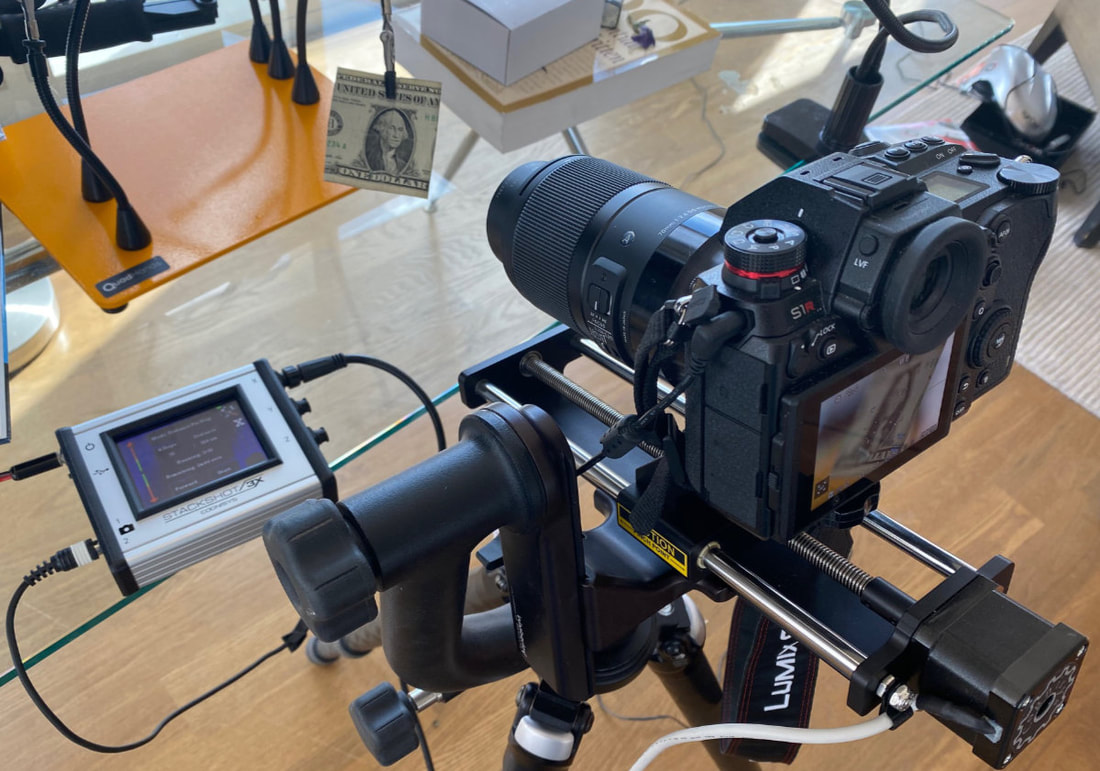 [Note: The device holding the dollar bill is sold by Amazon. It is a "QuadHands Deluxe WorkBench Helping Hands." The 5 gripper bases are magnets and can be repositioned.]
​
The photo below is part of a dollar bill. The stack was created with an advance of 0.384 mm for each of 100 images. 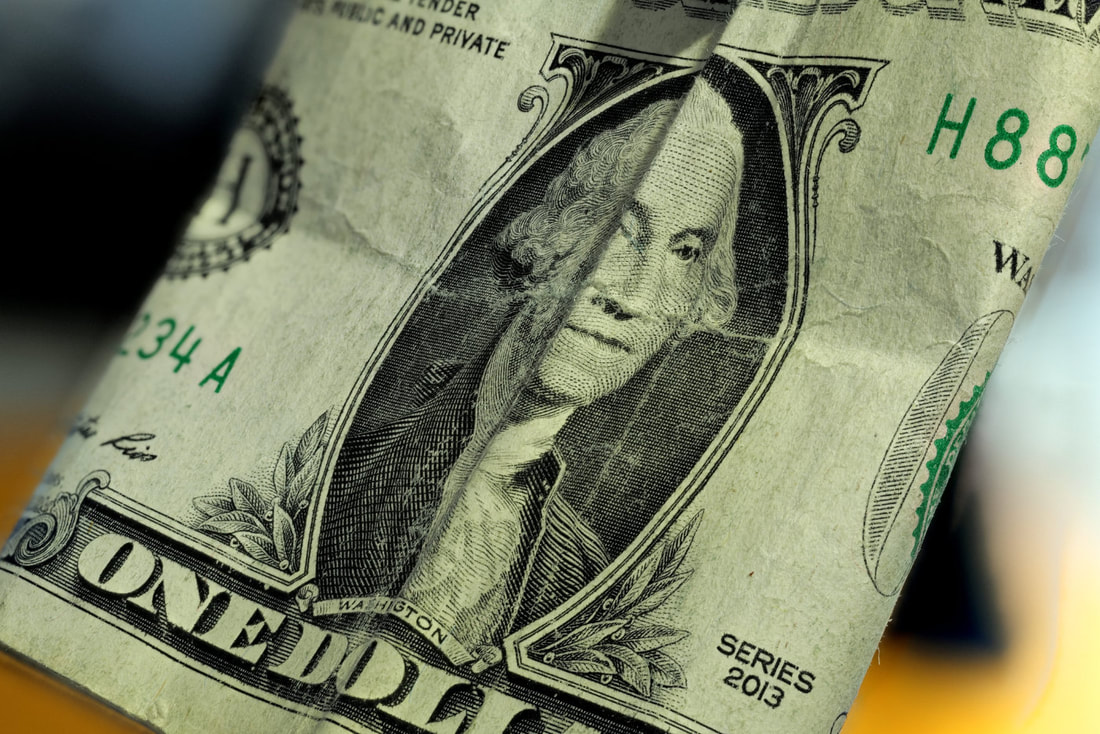 The photos below show the use of the Stackshot with the Cannon 60mm macro lens adapted to the S1R using the Sigma MC-21 adapter version that converts Cannon EOS mount to L-mount. The cannon lens is not autofocus, so a motorized rail is the only practical alternative for large magnifications. The cannon lens supports magnification up to 5x, compared to the sigma lens above that only goes as far as 1x. A stack with 100 images separated by 1/20 of a millimeter resulted in the composite image of the printing shown below. The total advance of the camera and lens amounted to 5 mm. 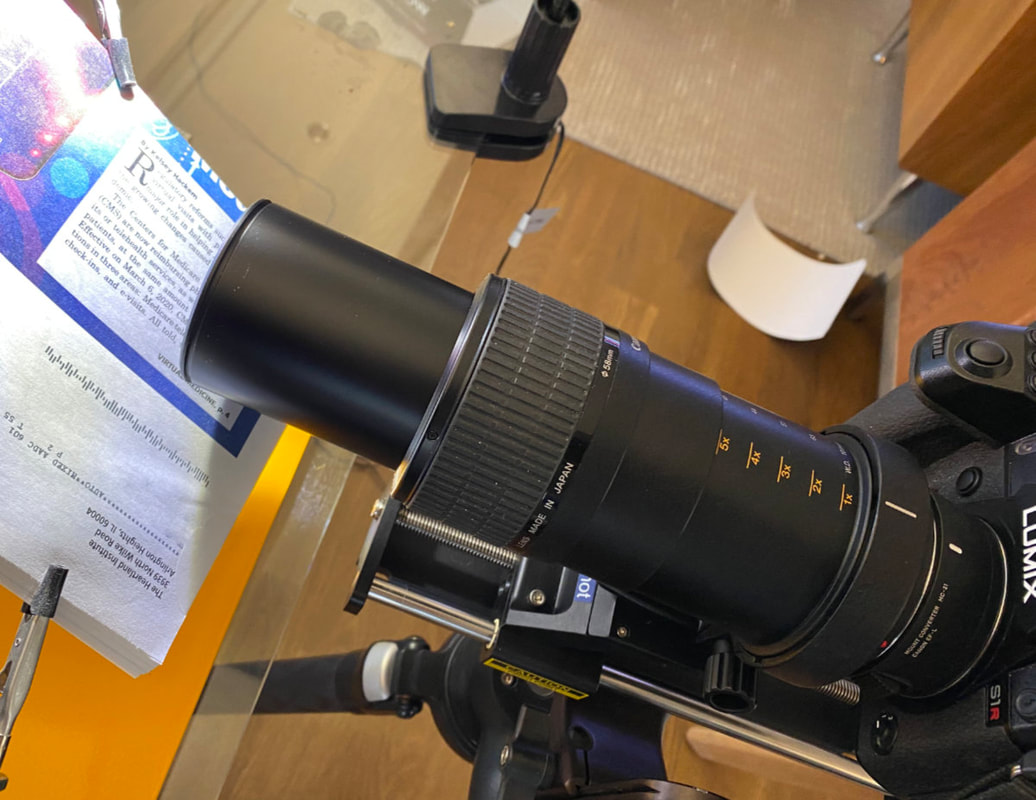 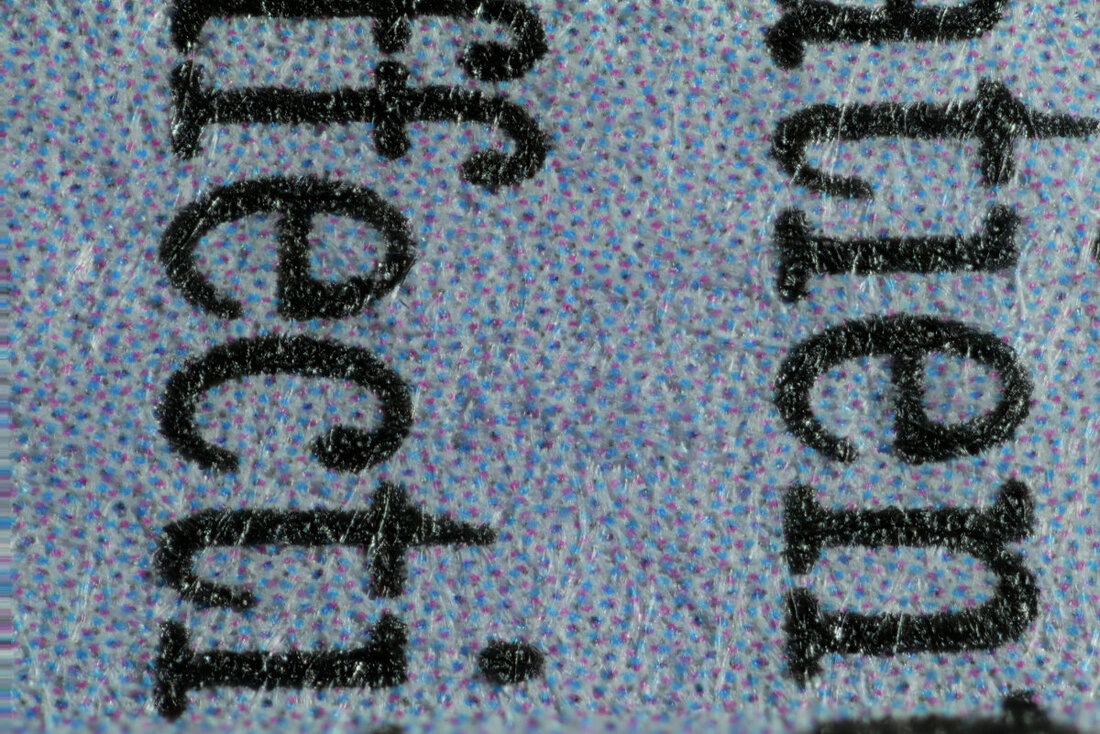 The two methods of creating focus stacks  discussed on this website both have perspective problems because the position of the viewer, the camera lens, is not stationary. In the case of a motorized rail the lens moves closer to the scene with each image. In the case of stepping the focus, the camera lens move away from the scene with each image as the lens moves closer to the sensor and the focus point move forward in the scene. For an extreme example of how changing perspective can ruin a composite photo from a stack, look here. If the movement of the lens is small compared to the distance of the scene then the change of perspective is small and will not have a noticeable effect. In the cannon lens example above the lens focal length is 60mm and the lens optical center is slightly more than 60mm away from the scene. The 5mm total movement of the lens relative to the scene is small. This will generally be the case when photographing at high magnification. When stacking photos of a large scale scene the movement of the lens relative to the scene is measured in millimeters while the distance to the scene is measured in meters, so the change in perspective is very small.The computation of the rail step is shown in the illustration below. 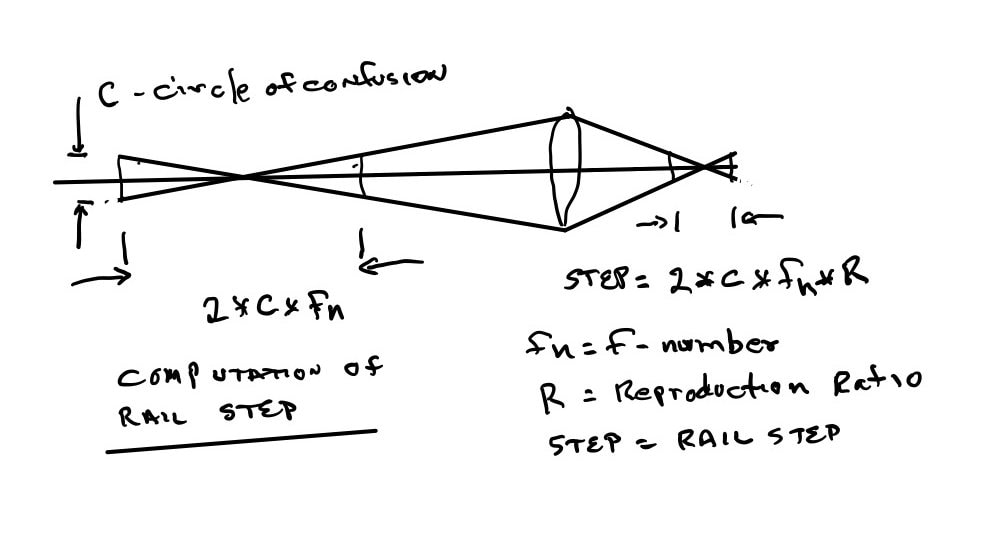 Perspective With Motorized Rail
The magnification in each photo is the same when using a motorized rail. Yet the finished stacked photo exhibits converging lines in the scene, associated with each successive photo having less magnification. The perspective of the finished photo is similar to the perspective associated with the lens used operating at the distance of the lens from the scene. This comes about because the stacking application aligns successive photos. The sharp zone in successive photos moves from one to the next, but alignment can still take place even though both photos are not sharp in the same place. The alignment requires that successive photos be slightly shrunk as shown schematically below. 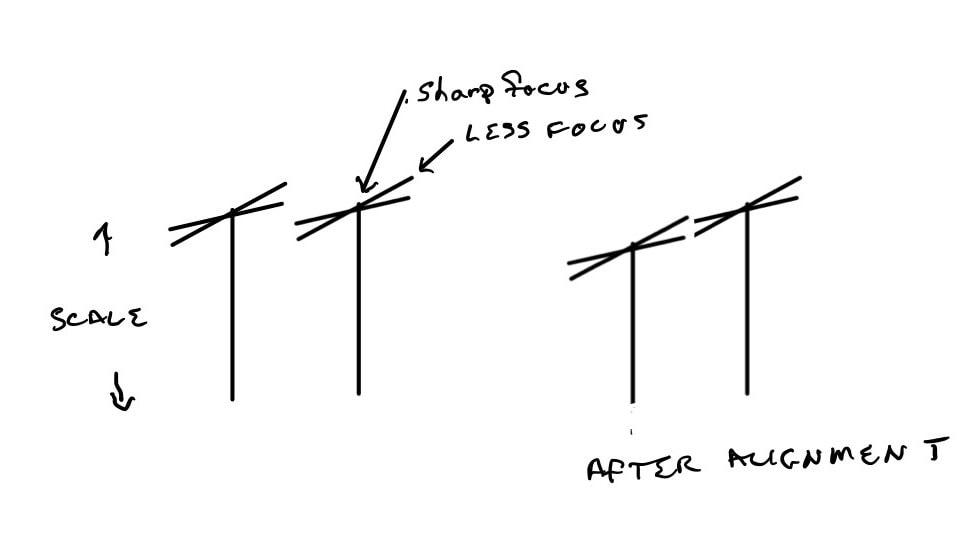