The settings needed to take stacks are shown in the following photos:
Although stacking utilizes the auto focus capability of the camera the rotary switch on the back of the camera must be set to MF. If the lens has an AF-MF switch it must be on AF otherwise stacking is inhibited. The start of stack acquisition is triggered by the shutter release. Preliminary to acquisition the lens can be and must be focused manually on the start of the stack location. Flipping the lens switch to MF provides a means to inhibit stacking and take a single photo to document the start of a stack. A stack in progress can be aborted by pressing the menu key. The photo of the camera back above also shows the sensor location symbol, a circle with a vertical line. Measurements are mad from the plane marked by this symbol.

If it is desired to take a stack handheld, image stabilization should be "always on." (There are two separate settings in the stabilization menu, "operation mode" and "when to activate." Both must be set.) A shotgun type sight such as the Olympus EE-1 as shown in the photo below will aid in keeping the camera directed to the target with small deviations. The shotgun sight is most relevant for the Nikon Z7 because the viewfinder is blanked during stack acquisition. The S1R viewfinder continues to work. But the viewfinder can also be useful on the S1R because the field of view may be greater than the camera viewfinder and the alternate eye can take in an even wider view.
​ 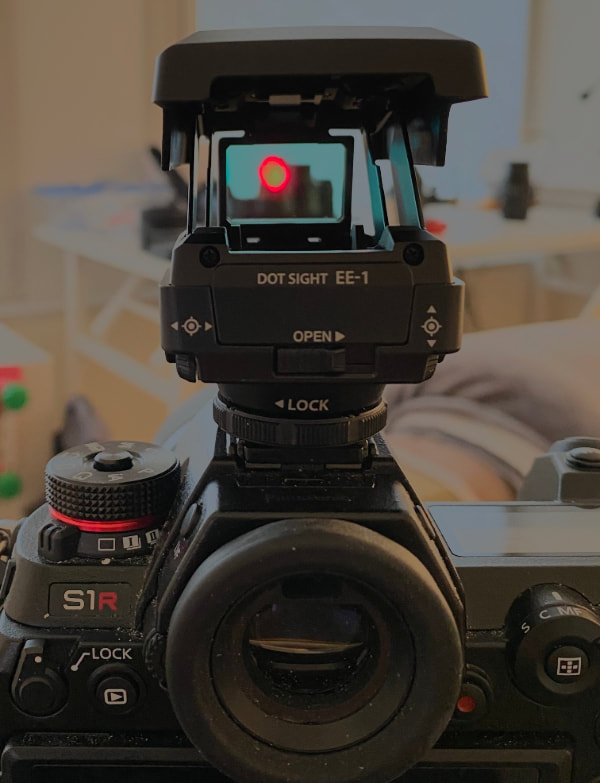 When stack acquisition finishes on the S1R the focus of the lens is automatically returned to the starting point. (This contrasts with the Nikon Z7 that leaves focus at the end of the stack.)

Undocumented Feature Burst Mode and Focus Bracketing S1R
There are two burst modes (I and II) on the rotary dial. Each mode has a speed of operation determined by the menu assignment for each dial position, low, medium and high. When enabled the camera takes photos as long as the shutter release is held. What is not obvious, is that if focus bracketing is enabled, the focus changes on each photo from near to farther. If the focus bracketing is enabled, burst shooting will stop when the focus passes infinity. With both burst and focus bracketing enabled the "image count" is greyed out, so the burst continues until infinity is reached or the finger is taken off the shutter release. If the shutter is half released, backing off to the half press level, the stack is paused and will continue when the shutter is again full depressed. Completely releasing the shutter will cause the focus to restore to its the setting at the beginning, or if the stack was paused, focus returns to the focus when the pause took place. This provides a mechanism for regulating the rate of which photos are taken for a stack. It also allows the photographer to pause stack acquisition. (Another method is to insert a delay after each photo, but the minimum is 1-second between photos.) When the internal buffer is full, photo acquisition will also slow down. The selection rotating switch on on the body could be either AF or MF (but the switch on the lens body, if there is one, should be on auto focus).

It is possible to insert a custom device (see below) in the connector for the remote shutter  control that will maintain half press even if the shutter release is completely released. That makes the required finger coordination less challenging  to pause and restart stack acquisition.

These features enable some interesting possibilities. The different photos in a stack can be time-adjusted by starting and stopping the stack. If a stream of runners is crossing the camera field the focus can be set on the runners with a stack set to go to infinity. A single initial photo can be taken by briefly pushing the shutter release, then wait until no runners are in the field to finish the stack (or retake the entire stack, requiring some manual insertion photos). The result will be sharp runners and a sharp background (hopefully). At a higher f-number such as 5.6 or 8, only a few additional photos are needed to finish the stack. Some photos can be manually removed to increase the focus contrast between the runners and the background. If the runners are approaching the camera and several photos of the runner will be taken before pausing the stack, there is the possibility that no photo of the runner will be sharp if the first photo is in front of the runner and the next behind because the runner has advanced beyond what would otherwise be as sharp photo. Over specifying the stack, by setting the circle of confusion smaller or reducing the menu step size, and speeding the burst rate may help this .

It is also convenient that after reaching infinity and releasing the shutter, focus automatically returns to the initial setting, or the setting at the last pause in burst mode, w/o the need to refocus. Even if infinity is not reached, releasing the shutter restores the focus setting. This can be used to acquire a stack dynamically setting the start and end focus positions. The value for the menu step is still needed and can be computed with the appropriate app.

The sketch below shows the circuit for a device that can be plugged into the socket for the remote shutter control on the S1R camera. When the switch is closed the camera will sense that the shutter release is being held at half press. This makes it easy to stop and start burst acquisition with or without focus shifting. The device will only be recognized by the camera if the switch is open at least one time. When the switch is closed the half press is in effect. When half press is in effect exposure is frozen. (Use this at your own risk.)